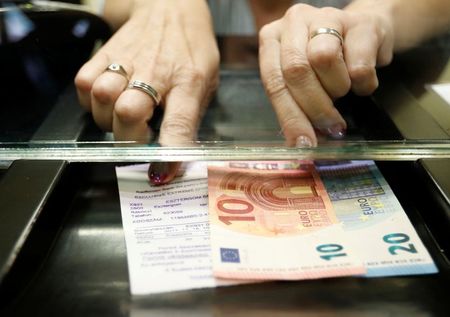 By Miroslava Krufova and Krisztina Than

BUDAPEST (Reuters) – The Czech crown and the Hungarian forint will extend gains in the coming year as their central banks hike rates to curb inflation during the post-pandemic economic recovery, a Reuters poll showed on Thursday.

Analysts expect the crown to continue firming, reaching 25.04 to the euro in the next 12 months, a 1.6% rise from Wednesday’s levels, according to the median forecast in the poll.

The Czech National Bank is expected to deliver a 25 basis point rate hike to 0.75% later on Thursday after a similar increase in June.

The poll forecast Hungary’s forint would rise 1.35% to 350 to the euro in the next 12 months with the central bank pledging “firm steps” on a monthly basis to rein in inflation “as quickly as possible”.

The bank raised its key base by 30 basis points in both June and July, taking it to 1.2%. Its next policy meeting is on Aug. 24.

Piotr Poplawski at ING Bank said he expected moderate gains across central and east European currencies in coming months, with the Polish Zloty a likely underperformer as interest rates in Poland are the lowest in the region and comments from the central bank’s Monetary Policy Committee (MPC) suggest a tightening cycle will only start in the fourth quarter.

“In short CZK should be a top performer, given a relatively traditional MPC stance, HUF should be in the middle, while PLN should lag them,” he said.

The recovery has brought a jump in inflation across the region – including to an annual 5.3% in Hungary in June, the highest in nearly a decade.

“As market expectations adjust to the new hawk in the region, we remain short as policy divergence should become more stark,” Morgan Stanley (NYSE:) said in a note to clients.

“By the time the (Polish central bank) hikes by 25 bps, as priced by the market, the policy rate in Hungary is expected to be closer to 2%,” they added.

The Polish central bank has so far maintained a dovish stance, with Governor Adam Glapinski saying it will not rush to hike rates.

The zloty, which has underperformed its peers so far this year, is forecast to rise 2.6% to 4.43 per euro in the next 12 months, in line with the previous forecast.